When you hear, “football player”, what is the first thought that comes to your mind. Is it “a caregiver”?

It will be after you listen to this podcast. 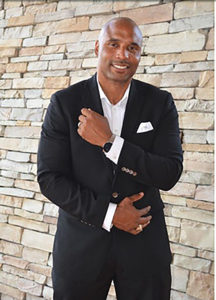 Toula’s special guest in this podcast is former Jacksonville Jaguar defensive back Donovin Darius. Donovin was a first-round draft pick for the Jaguars in 1998, and played nine seasons with the team. He retired from football in 2013.

More importantly, Donovin has been a caregiver for his mother, who became ill with various situations.  Donovin said, “I knew that I had to do whatever I could do – staying with her, having her live with me, taking her to the doctor and the hospital. To me, it was the least I could do for her.”  Since he retired from football, Donovin has been active in other careers, as an author, motivational speaker, fitness trainer and, through his Donovin Darius Foundation, host of empowerment and athletic camps for youth and families (To learn more, go to donovindariusfoundation.com.)

Donovin has an amazing story to share with you and other caregivers. That is why he was named as the Keynote Speaker for the 2018 Caregiver Coalition of Northeast Florida’s Caregiver Expo. (To learn more, go to MyCaregiverConnection.org)